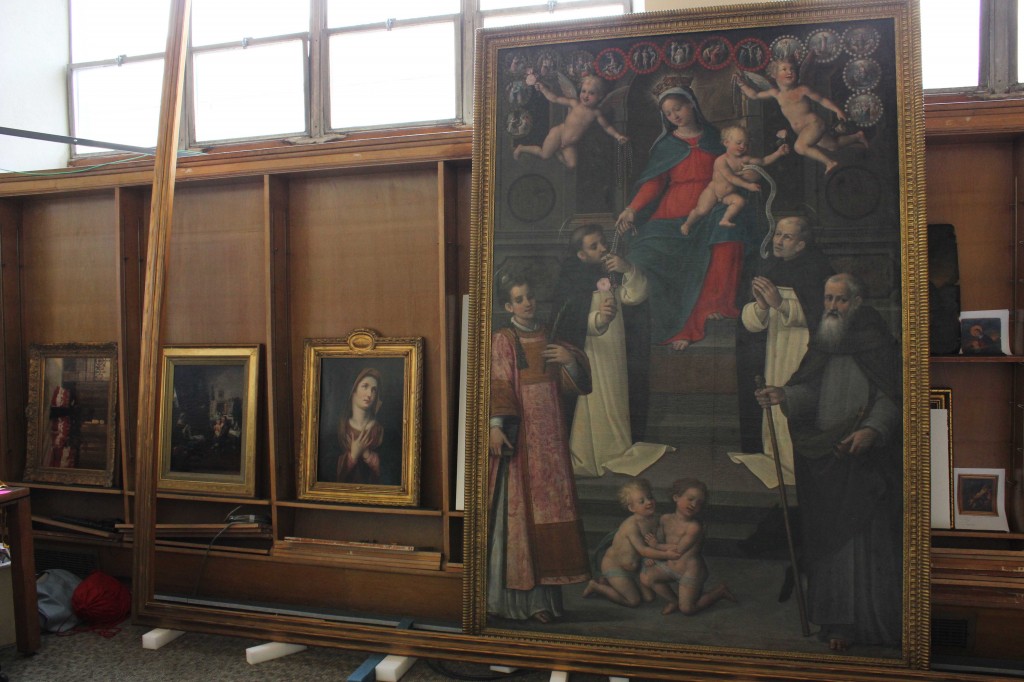 The Triumph of David is one of several works of art belonging to Princess Ruspoli’s collection, once an incredibly rich and vast group of paintings, furniture, sculpture and other artworks that were housed in her castle located in Nemi just outside of Rome.  Research on the history of the collection has revealed that the Princess feared for the safety of her precious collection as the world became engulfed in the turmoil of the Second World War.  In a moment of great haste, three crates were filled with select pieces of art and shipped back to the United States; two were sent to her family in Oak Hill, Georgia, and one to New York City where the Princess had an apartment.  Ultimately these artworks would become the last surviving pieces of her vast collection, as the war left much of her castle in ruins with the German forces destroying the remaining artifacts as they were forced to retreat from the town of Nemi.

Years later, Princess Ruspoli befriended Father Falvey who was making plans to build a new library at Villanova University (today known as Falvey Memorial Library).  She decided to donate several of her paintings to adorn the walls of the new library and to be enjoyed by future generations of students, faculty, and the general public. 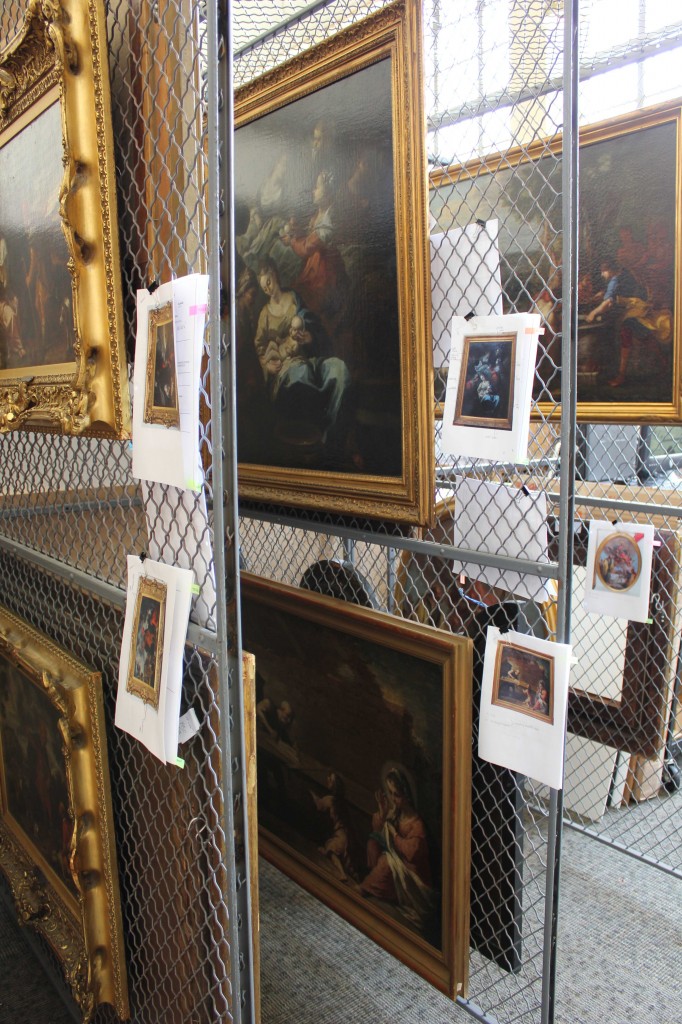 While the Triumph of David (attributed to Pietro da Cortona) has remained on the wall of the library since its arrival in 1950, the University has not had sufficient space to display all 30 paintings donated by the Princess. This past week, however, recent efforts were made to re-unite this small collection, bringing many of the works out of storage for examination for the first time in several decades.

Many of the paintings were delivered, both from storage and from various locations around campus. Upon their arrival, the conservation team was tasked with documenting each of the works, as well as constructing a suitable temporary storage space within the Old Reading Room in Falvey Library. The cage seen above is very similar to storage space in many museums, as the paintings can be safely positioned once they are fitted with the proper hanging hardware. Other paintings are currently being stored vertically in wooden recesses lined with Volara ® (a closed cell plastic foam made from polyethylene), protected with pieces of foamcore that have been cut to size.

The conservation interns and volunteers have created new records for each of the paintings, including information relating to construction and condition, evidence of past restoration work, visible evidence of damage, and other details that could help with future provenance research.

High-resolution photographs were taken of each of the paintings and notations have been made to indicate areas of loss, damage, and repair that can be seen in visible light.  Oftentimes un-original areas can be easily identified in raking light, which can be achieved simply by looking at the painting from one side, parallel to the plane of the canvas. Areas that have been repaired or heavily overpainted can reflect visible light differently than the original surface.  The paintings were also observed under ultraviolet (UV) light, which can often indicate locations of previous restoration.  Oil paint and/or overpaint applied in recent years can appear very dark under UV light while aged oil paint and varnish tends to auto-fluoresce.  Some of the pieces were also viewed using an Infrared camera (as seen in the photo below) which can be used to reveal underdrawings or preliminary changes beneath the visible paint layers.  All of this information has been compiled into separate documents for each painting in the collection and will remain accessible to future generations of scholars and students. 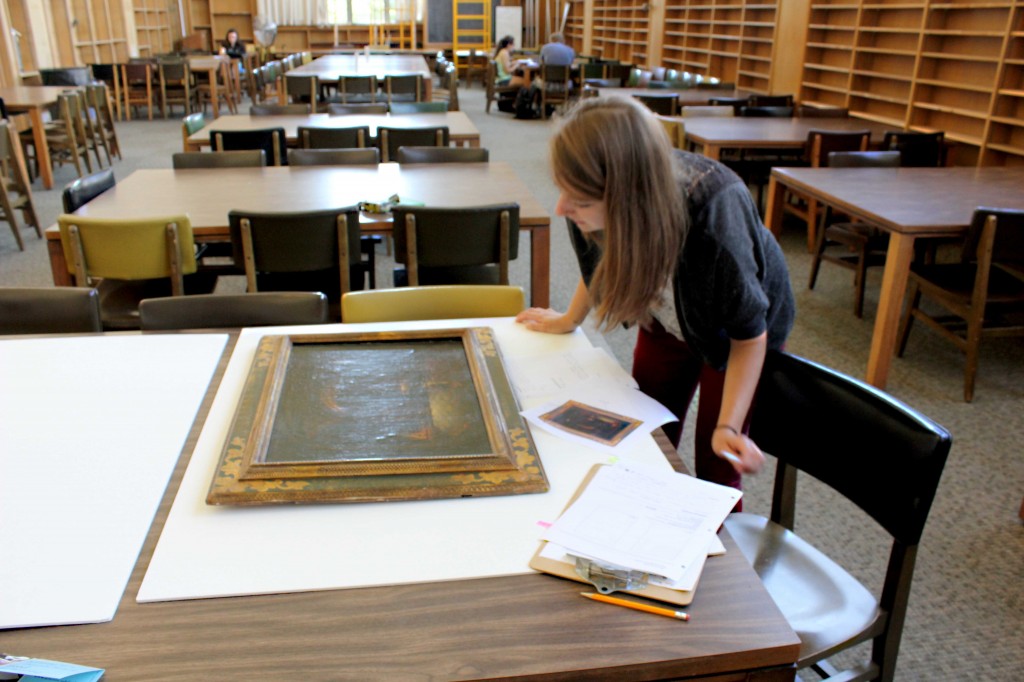 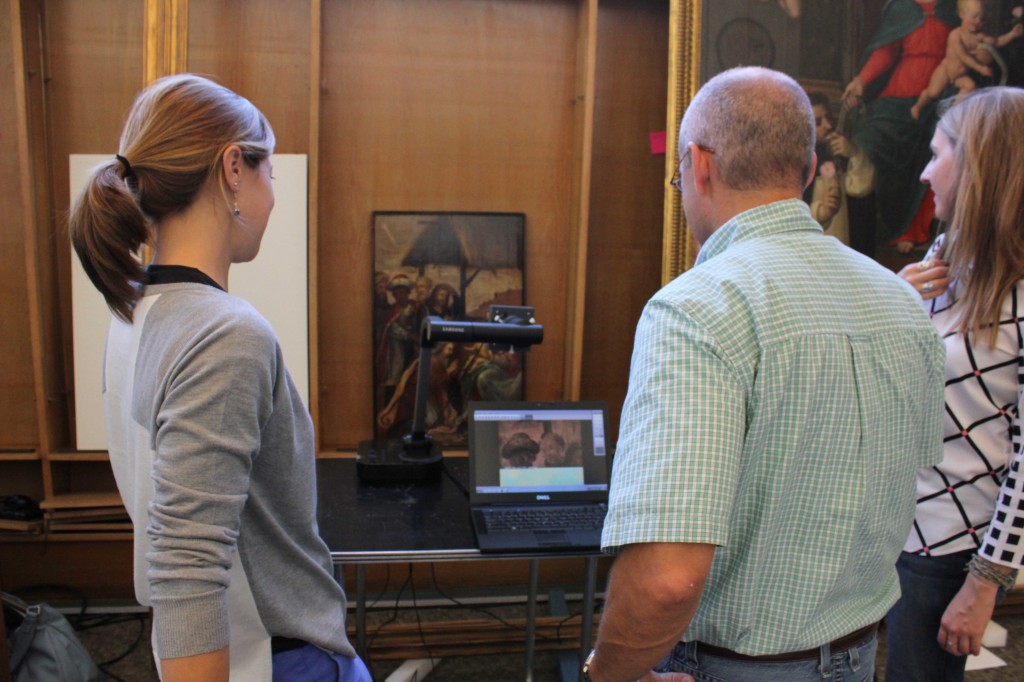 A basic overview of each painting’s current condition is crucial in order to preserve the collection. Documentation will prevent items from being lost even if they are not displayed in the same location, and condition reports can indicate which works might benefit the most from being treated by a conservator, and whether a painting can be safely put on display.

Many of the works are in excellent condition, and the conservation team is especially excited about a few of the pieces. Most notable is an eight foot high oil painting depicting “Madonna of the Rosary,” that is currently attributed to Cosimo Daddi, which can be seen in the overall photo at the top of the page.  Other works of interest are the Sassofferrato portrait of the Madonna, shown to the left of the Daddi, a Flemish oil on panel triptych, and a large oil on copper, shown below. 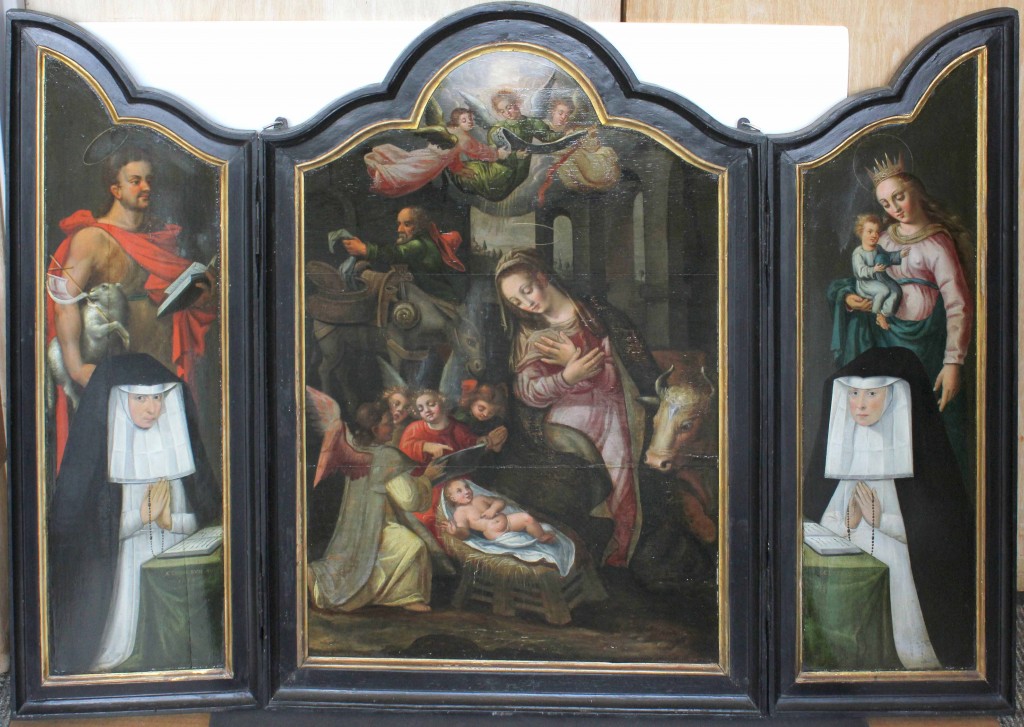 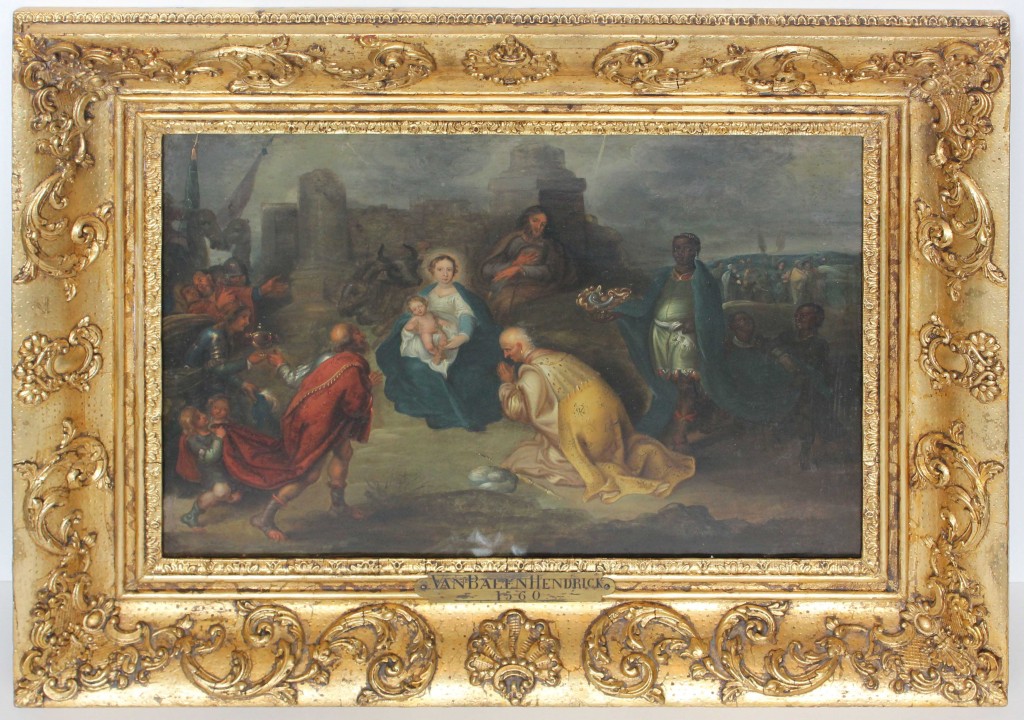 Students at the University are encouraged to come see the new collection pieces, and research on any of the works is highly encouraged. Princess Ruspoli donated her art with the intention that it be studied, and the reunion of the works is the first step towards achieving that goal once again.