Pentimenti in “The Triumph of David”

Pietro da Cortona ran a prominent workshop and supervised a large group of assistants. Since Pietro was also a fresco painter who was in high demand, he would often have to leave behind his studio assistants to complete commissions and other projects.  This may explain why so many of Cortona’s oil paintings possess several compositional changes.  Assistants may have struggled with certain sections of a painting and when their master returned Cortona himself may have altered details or large areas of the canvas.  These changes made during the painting process are known as pentimenti, and Pietro’s workshop is particularly known for them.

Throughout the cleaning stage of this treatment, the conservation team revealed details previously hidden by layers of degraded varnish and thick overpaint, including evidence of pentimenti.  There are several ways conservators can tell there are pentimenti present under the final paint layer. 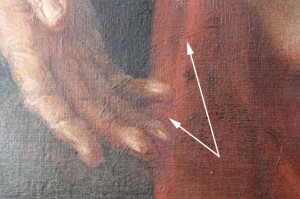 Above: Impasto that suggests pentimenti.

Often brushstrokes in the paint layers do not appear to match up with the visible image.  If a thin layer of paint is applied over thick paint layer containing texture, brushstrokes from the layer beneath can often be seen up close and in raking light (light shown across the surface at an oblique angle).  The image of Abner’s hand demonstrates brushstrokes that are perpendicular to the direction of his fingers, most likely an earlier manifestation of his red drapery.  The hand was not painted thickly enough to hide the texture from the previous paint layer, and therefore, evidence of the drapery remains. 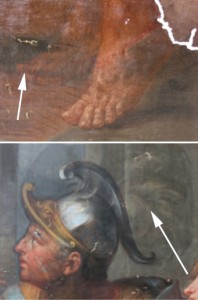 Earlier compositional elements can show through the final paint layer as well.  As oil paint ages, the paint film becomes transparent due to crosslinking and the formation of metal soaps.  After hundreds of years, the viewer may be able to see evidence of underlying forms peering through the paint on the surface.  Pentimenti can sometimes reveal how an artist would adjust certain compositional elements like hands, feet, and faces.  Several figures in The Triumph of David appear to have extra feet because of this phenomenon.  For example, a ghost-like foot became more visible after removal of the degraded varnish, indicating the artist’s initial position of the foot before it was repainted (what we see today).  Similarly, swirly white strokes above Abner’s helmet suggest that it originally possessed a feathered plume before it was covered over with the background architecture. 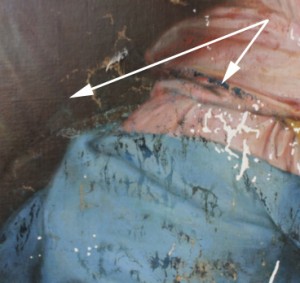 Above: Areas of abrasion that reveal changes in the blue robe.

Areas of abrasion can also provide evidence of pentimenti.  If the top paint layer suffered from over-cleaning or flaking over the course of the painting’s life, the viewer eventually sees the color of the initial paint layers beneath.  For example, the blue robe of the crouching woman in the image to the right appears to have been completely redone by the workshop.  The dark blue paint exposed in the losses throughout the pink robe and along the outer left contour tells us that the blue portion of the robe was originally much higher and extended out to the left.