As we (slowly) move towards spring, the science team has been working on the microsample cross-sections from Triumph of David using our suite of analytical instrumentation.  As we noted in our previous entry, if a sample is going to be removed from a painting, we are going to try to get the most amount of information from it as possible. To investigate questions of pigmentation beyond the color profiles seen with bright-field microscopy, we move on to a new technique called scanning electron microscopy paired with energy-dispersive x-ray spectroscopy (SEM/EDS). 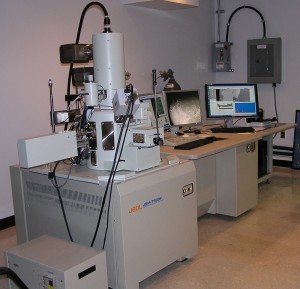 Photo of a SEM

Harkening back to the science blog post describing how we use fluorescent X-rays to noninvasively image and characterize the painting, SEM/EDS utilizes a similar method to analyze pigments in our cross-sections. XRF is useful in giving us a general idea of the elemental breakdown of inorganic pigments in an area of the painting; however, because of the high penetration power of the x-rays, and the fact that it is a non-invasive characterization method, we have no way of telling whether the elements we are finding in an area is a part of the ground layer, pentimenti, or a restoration campaign. SEM is a form of microscopy in which the sample is bombarded by a high energy electron beam, which can give very precise images (up to 50,000 times magnification!) based on the collection of the scattered electrons that have bounced off the surface. We can then use these images to collect elemental maps of the layers using EDS software. EDS detects fluorescent x-rays, just like XRF instruments, but with much higher spatial precision. 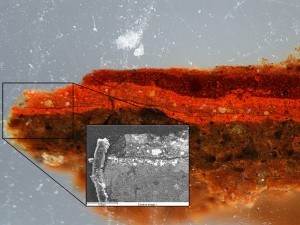 Location of an SEM image on the overall cross-section

The particular sample we’re discussing today was mentioned at the end of the last science blog post, taken from the red cloak of the heavily overpainted soldier on the left-hand side of the painting (see image to the left). With the enhanced magnification capability of the SEM we can get precise information concerning the inorganic materials down to the individual pigment particles. This particular SEM image, the black and white image in the photo to the left, was taken at 450x magnification, and provides a wealth of information concerning the sample.

In the main SEM image, it’s pretty clear to see that there’s at least 5 layers of paint in this one subsection. By combining this SEM image with elemental mapping data, we can see the general elemental breakdown for each of these layers. The bottom layer, with most of the calcium, silicon, potassium, and aluminum is probably some sort of clay-based ground, as seen in the image below.

Comparison of the Silicon (Si) elemental map with SEM/BSE image

There then appears to be a layer of vermilion (as evidenced by the presence of mercury and sulfur–HgS) before a thin layer of organic material (the thin dark layer in the SEM image) was applied, shown below.

The layers above the organic layer are where the cross-section becomes incredibly more complex, including a mixture of vermilion, aluminum-based lakes, lead white, and even some Naples yellow, as seen by the spectral evidence below.

As you can see, there’s a lot of information to be gleaned from such a small sample, and there is still a lot that is unknown and up for interpretation. But we’re analyzing everything piece by piece and can hopefully provide more answers in the future. Until next time!