Just a little over two weeks ago, the Conserving a Giant conservation team was anxiously awaiting the arrival of technicians from General Electric (GE) Inspection Services Department, hoping to uncover secrets hidden under the paint using x-radiography.  With the generous support from the Samuel H. Kress Foundation, x-radiography was performed on Triumph of David and other paintings from the Villanova University Collection recently reunited in Old Falvey.

By directing x-rays through a painting and collecting the resulting image on radiographic film, x-rays can be used to highlight what is underneath the paint surface that we see today.  Some of the information that can be collected from the x-radiographs include pentimenti (compositional changes), areas of previous fills or older repairs, as well the location of tears and holes in the canvas or paint layers.

X-rays are shorter in wavelength than ultraviolet radiation, and the energy of that radiation allows the x-rays to penetrate through the paint surface.  The depth of penetration depends on the thickness and the density of the material that the x-rays are moving through.  For example, lower-density materials, such as the canvas or lighter weight elements such as carbon black, do not absorb as much x-ray radiation, and appear darker in the resulting x-radiograph.  Materials with higher densities, like heavy metal pigments such as cadmium red and lead white, absorb x-rays quite easily and show up as white or brighter grey in the x-radiograph.  One of areas that we were especially anxioius to learn more about was what might be located under the shield.  The shield is currently painted a flat black, and in comparison to the highly decorated regalia in the painting.  Conservators noted that there are brush stokes visible through the black paint that do not coincide with what is on the surface of the painting.  The chance to solve the mystery of what lies underneath those brushstrokes was eagerly anticipated.

However, the conservation team first had to create a system for x-raying the painting, to be sure that areas of the painting would not be missed during the capture of over 100 x-ray images.  Another challenge facing the team was being able to complete the analyses of the large-scale painting in a two-day time span.  Prior to the arrival of the GE X-ray team, an alpha-numeric grid system was devised to aid in the positioning of the x-radiographs, ensuring an overlap of 1¾” between each exposure. 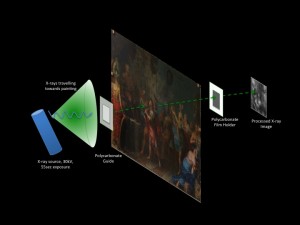 Schematic of x-rays penetrating through
the painting, and being captured on the x-ray
film. The processed image is seen to the far right.

Dr. Anthony Lagalante and Brad Thorstensen from the Chemistry Department devised a novel method for securing the x-ray film to help maintain the grid system during data acquisition. This involved two steps; first, the location of each exposure was marked on the verso of the stretcher bars and second, a specialized film holder was designed to facilitate the process over a two-day time span.  A 22¾”x24½” x-ray film holder, designed by Thorstensen and Lagalante, was created using sheets of polycarbonate with rare-earth (neodymium) magnets mounted in each corner.  The magnets were padded with a soft synthetic rubber to protect the surface of the painting and an insert was created using 3M VHB tape.  Lines were also taped on to the holder as a guide for positioning the holder in the correct grid pattern. While this system worked well for The Triumph of David, it should be noted the painting is without impasto or cupping which afforded safe contact between the film holder and the painted surface.

For the x-radiographic examination, the GE technicians used a Spellman LORAD LPX160 tube in conjunction with high-resolution 14″x17″ digital-based phosphor x-ray films. Images were captured at 30kV of radiation, which offered better quality in the resulting image.  To avoid any radiation exposure , the GE and Villanova teams stayed outside of the cage during capture times.  To be confident in safety, we also had ND-2000 dosimeters provided by James and Mark to measure the levels of radiation in the room throughout the imaging process.  (A safe level of radiation is 2 millrem per hour or less).   A GE Pegasus CR 50P digital scanner was moved into the space to scan the films as soon as they were exposed.  This allowed for immediate scanning of the films, meaning that we could readily view captured x-radiographs, and that multiple sheets could be used simultaneously. 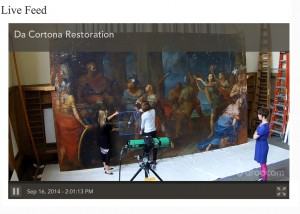 Kristin and Sarah helps align the front guide plate, while
Keara looks on. The green x-ray source is focused onto the
white x using a laser beam. The phosphor film is located just
behind the painting in the same location as the front guide.

Due to the sensitivity of the process, the Reading Room was closed off for the three days of setting up and x-raying Triumph of David and the other paintings in the collection.  However, remote access to the Live Feed allowed the general public to follow along as we made each capture across the entire surface of the painting.

At the end of the first day, some of the captured x-radiographs provided insight in to the moving of David’s hands on the sword, and even the indecisiveness in the placement of Abner’s thumb.  The second day was spent reviewing the images and recapturing films that had too much excitation (“blown out” with too much white) or too little excitation (too dark).

But the greatest discovery was found in the paint layers beneath the dark shield.  In reviewing the captured images, a strange hand was seen holding some rod-like sticks, an object that was eventually determined to be a fasces.  Fasces are bound bundles of wooden rods equipped with an axe blade and were often associated with magisterial power in ancient Rome (there is even a fasces on the US dime).  Currently the team is faced with a new question: why was this man initially included in the composition and, more importantly, why was he painted out? 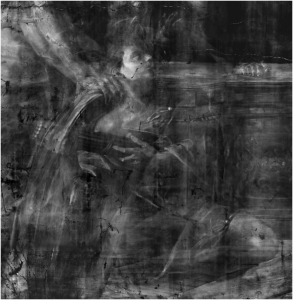 X-radiograph composite image. The figure is holding a
fasces, and the axe head can be seen just above the left
hand of the hidden man. 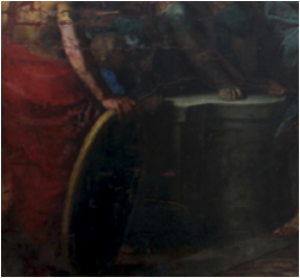 How the sheild area appears today.

In the end, over 120 images were captured, which lead conservator Kristin deGhetaldi compiled into the final image seen below. To learn more, please come visit Old Falvey, as we are very excited to share the discoveries made while examining Triumph and the other paintings in the Ruspoli collection with x-radiography! 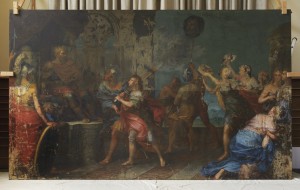 We will leave you with the composite image of all of the x-radiographs taken of the Triumph of David. Looks amazing. Leave a comment below if you can see any differences between the painting and its x-radiograph!!