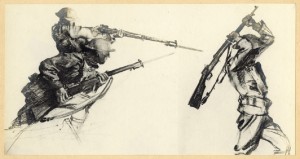 Artists have attempted to capture the suffering and heroics of war since the Classical era, from Homer following the exploits of Achilles during the Trojan War in The Iliad to Matthew Brady capturing men fighting in the American Civil War in somber photographs.

The 20th century brought a new kind of conflict — global, industrialized — increasing the scope of the horror and the ability to inflict mass casualties. And with these new conflicts came new attempts to document them. One involved a Philadelphia artist, who participated in the war begun 100 years ago this weekend with the assassination of Austrian Archduke Franz Ferdinand.

George Matthews Harding was a Philadelphia-born artist and architect. Before becoming a full-time artist and writer, Harding worked briefly as an architect while studying art at the Pennsylvania Academy of Fine Arts. He contributed illustrations to The Saturday Evening Post and Harper’s Monthly, taught briefly at the University of Pennsylvania and Moore College of Art, and established his own studio. In addition Harding painted mural decorations for theaters, hotels, and other civic projects. 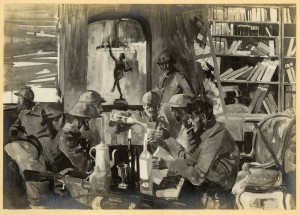 After the United States’ entry into the First World War in April, 1917, Harding began working as a poster illustrator for the U.S. Navy Recruiting Service before being one of eight individuals selected as American Expeditionary Force combat artists to serve overseas in France.

Commissioned in February, 1918, as captains within the Engineers Reserve Corps and given little military training (in one instance, “training” consisted of a five-minute briefing), combat artists were tasked with producing original artwork that depicted the wartime experience of American soldiers serving in France. It was believed to be the first instance in the U.S. Army of men commissioned solely to produce art during wartime. 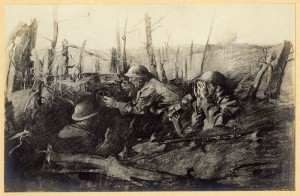 Despite the objective technologies of still photography and the motion film camera available by 1917 – when the United States formally entered the First World War – there was a desire on the part of the American government to record the war subjectively.

In the eyes of General John Pershing (who personally approved the establishment of the role of combat artists), these artistic renditions would not only contribute to the visual historical record of the War, but also prove amenable to propagandists’ repurposing and help drive the sale of Liberty Bonds.

Arriving in France in the early summer of 1918, Harding and the other combat artists were provided credentials allowing relatively free travel. Using whatever transportation they could find, the soldiers toured battlefields to record their impressions of what Harvey Dunn — a combat artist from South Dakota — called “the shock and loss and bitterness and blood of it.” 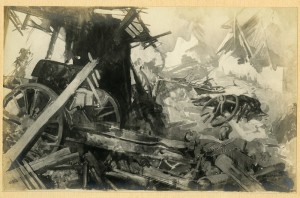 These eight men created various pictorial representations, in a variety of media, which were submitted for publication to the Pictorial Publicity Division of the Committee on Public Information (the government’s propaganda arm during the War). Stationed at Neufchateau, near the front, the artists were officially directed not to participate in actual combat, but more than one ventured to forward-firing trenches to observe combat firsthand, including Harding. 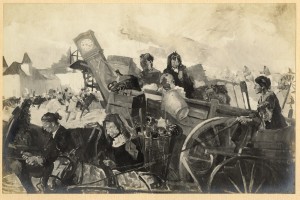 Unlike the heraldic depictions of military glory prevalent in other government-sponsored visual arts, the majority of Harding’s illustrations contain depictions of the common tasks delegated to enlisted men and “the grim reality of war.” Shelled buildings, deserted villages, wandering refugees, casualty clearing stations; reality was emphasized over a glorification of battle. 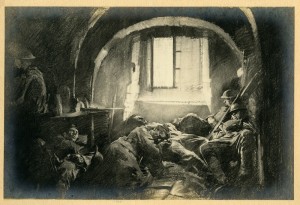 In fact, the combat artists’ depictions were so faithful to the actual experiences of enlisted men that the Committee on Public Information deemed the initial output “lacking in sufficient drama,” and began to doubt its use for propaganda. It was Pershing, ever the soldier’s general, who expressed his “heartiest approval” for the combat artists’ work, and asserted that only men serving in France — not in Washington — could determine “sufficient drama.”

Rising death tolls, photographs of the decimated French landscape, mutilated and injured soldiers returning home, often shell-shocked; these did not apparently satiate the Committee’s need for the dramatic. 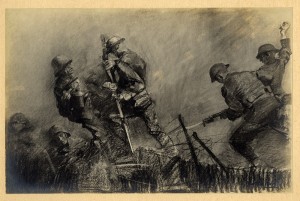 Harding’s illustrations record war as it was experienced, not as it was wistfully imagined. His illustrations depict men on “working parties” — in which soldiers ventured into no-man’s land to dig trenches and reconnoiter enemy movements; interacting with captured German soldiers, including their interrogation by Allied officers; and “mopping up,” military argot for clearing recently gained areas of remaining enemy soldiers. 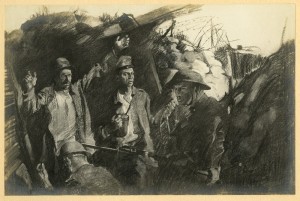 Also depicted by Harding are soldiers sleeping in abandoned buildings, walking through plumes of deadly gas, and transporting materiel in preparation of an offensive. While the soldiers comprising Harding’s subject matter are primarily Allied forces, these tasks were nearly universal to all armies serving in the Western Front that experienced the stalemate and attrition of trench warfare. 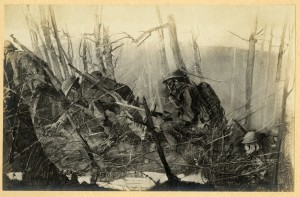 By the end of the war, Nov. 11, 1918, the artists had produced nearly 500 pieces of art. A rather hardy man, Harding survived the First World War and returned to Philadelphia. After the war, Harding published a limited-run folio, The American Expeditionary Forces in Action, containing lithographs of his illustrations. 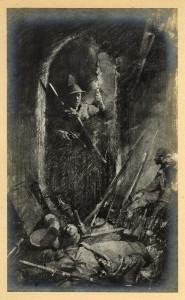 Following the surprise bombing of Pearl Harbor, Harding re-enlisted as a combat artist in the Marines –when he was in his sixties. Harding was sent to the Pacific theater and painted depictions of the Marine’s island-hopping campaign, including their landing at Guam. This portrait photograph was taken shortly after Harding’s arrival in the Pacific, 1942. 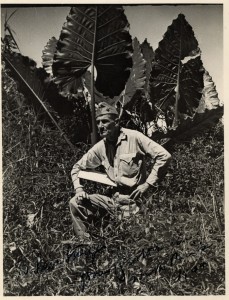 The Historical Society of Pennsylvania