Antonio Sant’Elia, an architect allied to the Italian Futurist Movement was killed on October 10 during the Second Battle of the Isonzo. His designs for a Citta Nuova, a “New City” were visionary masterworks but his death insured that they would live on in the pages of Futurist journals. We can never know whether Sant’Elia’s would have been realized had he lived, but they remain a part of Futurism’s vibrant legacy.

The English author Hector Hugh Munro, who signed his work “Saki” was a teller of mordant tales. His “Sredni Vashtar” has graced many an anthology of horror fiction.  Refusing a commission, Munro enlisted as an ordinary trooper and rose to the rank of Lance Sergeant. He was shot and killed by a sniper during the Battle of Ancre on November 14, 1916. Ironically, one of his pre-war works was a political satire When William Came, A Story of London Under the Hohenzollerns.

Emile Verhaeren was a towering figure in the Belgian literary world and a leading poet in the French-language Symbolist Movement. Far too old to serve in Belgian army, Verhaeren went to war in his own fashion, writing stirring appeals in defense of his country and touring widely to rally the allies. Returning from such a speaking engagement in Rouen, France he fell beneath the wheels of a moving train and was killed instantly on November 27, 1916.

A non-literary death of note was that Emperor Franz-Joseph I, who ruled over the Austro-Hungarian Empire from December 2, 1848 until his death on November 21, 1916. During the course of his long reign he lost both his nephew, Archduke Franz Ferdinand and his wife, Empress Elizabeth, to assassins. His son and heir, Crown Prince Rudolf committed suicide in 1889.


Event: “The Forgotten War: Little Italy in World War I” 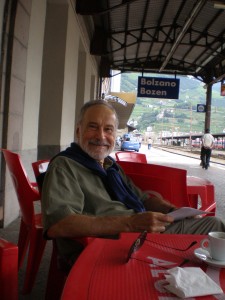 Dr. Juliani is a Villanova University retired Sociology professor. He has titled his talk, “The Forgotten War: Little Italy in World War I.” The presentation will focus on Italy in the Great War, the American role on the Italian Front, and particularly the participation of Philadelphia’s immigrants in the Italian army against the Austro-Hungarian Empire and Germany and as members of the U.S. Army with the Allies on the Western Front. Along with examining Little Italy as a distinctive home-front during the course of the war, we shall also consider the long term consequences for the assimilation of Italians in Philadelphia and America.

Light refreshments will be served.

This event, sponsored by Villanova University’s Falvey Memorial Library, is free and open to the public.

It all began with German Chancellor Otto von Bismarck. He had two concerns—one, that France might try to reclaim land lost to Germany in the Franco-Prussian War, two that Russia might continue making advances into the Balkans. So, in 1882 he proposed what he considered would be a defensive alliance with the Austro-Hungarian Empire and the Kingdom of Italy, the thought being that the Hapsburgs would contain Russian ambitions, while France would he faced with a two-front war—Germany to the northeast and Italy to the southeast if she attempted an offensive.

Neither the French nor the Russians were happy with Bismarck’s solution. France was left isolated, and Russia felt disrespected, so the answer for their diplomats was to form new alliances. In 1904 France signed the Entente Cordiale with Great Britain. The French had a much larger land army than Britain, but Britain’s fleet was without peer and once hostilities actually broke out, soon proved that control over shipping and the sea-lanes was no small weapon in one’s arsenal.  So at this point France could say that if they attacked Germany, Italy would attack them, yes, but Britain and her formidable fleet would move against them both.

Thus far, this system of alliances was, in its own strange way about preventing wars. In essence it was saying, “Look, I’m a little guy, but if you attack me, my bigger stronger friend will attack you.” If Russia thought a victory over Austria-Hungary would be easy, they had to re-think things if suddenly Germany, with the largest and strongest of all European land armies, would move against them.  Similarly, if Germany had an urge to attack France, they would be confronted with the mighty Royal Navy.

England further involved herself by signing the Anglo-Russian Convention in 1907. Now, if Russia decided to take on Austria-Hungary, it was true that they would have to face the German army, but Germany and her Hapsburg allies would face retaliation at the hands of the Royal Navy. In theory this would all work as long as the players were rational and took their national interests into account.

But true believers are rarely rational and Young Serbia felt that the Hapsburgs had no place in the Balkans. When Gavrilo Princip fired his pistol, he wasn’t thinking much about the ultimate interests of England, Germany, France or even Russia, “the Mother of the Slavs.”

Now there was an all-but insurmountable problem. Each of the potential combatants, with the exception of Britain and Germany had dealt with politically-motivated assassinations of their heads-of-state, and none of them approved of the custom. Austria-Hungary was the aggrieved party—the heir to their throne and his pregnant wife had been murdered. What were they to do? A volley of pistol-shots had set in motion a machine that there was no stopping.