Over the flat slopes of St. Eloi
A wide wall of sand bags.
Night,
In the silence of desultory men
Pottering over small fires, cleaning their mess-tins:
To and fro, from the lines,
Men walk as on Piccadilly,
Making paths in the dark,
Through scattered dead horses,
Over a dead Belgian’s belly.

The Germans have rockets. The English have no rockets.
Behind the line, cannon, hidden, lying back miles.
Beyond the line, chaos:

My mind is a corridor. The minds about me are corridors.
Nothing suggests itself. There is nothing to do but keep on.

Trenches: St. Eloi
(Abbreviated from the Conversation of Mr THE)

Until now the Allies were slightly ahead in the grisly business of killing off the artistic elite of the pre-war world. Germany had suffered the loss of its core creators of the Expressionist movement in art and literature—August Macke and Georg Trakl in 1914, August Stramm in 1915 and Franz Marc in 1916—whereas Britain had lost only Henri Gaudier-Brzeska, a promising artist and sculptor in 1915. But this would change on September 28, 1917 with the death of Lieutenant Thomas Edward (“T. E.”) Hulme.

Had he survived the war Hulme would undoubtedly have exerted great influence over British art and literature through his already-established reputation as a philosopher of Art, while his extreme conservatism would have served to moderate the influence of the politically-engaged (and left-leaning) poets of the 1930s.

What is perhaps forgotten is the handful of revolutionary poems Hulme left behind. Revolutionary poems from an arch-conservative? This sounds a bit strange, but it arose out of Hulme’s conviction that poetry needed to find a new path somewhere between the emotional, quasi-religious excesses of Romanticism and the dry-as-dust offerings of Classicism. What Hulme found was the power of the image, presented without rhetoric or sentimentality to evoke a response in the listener or reader. He influenced Pound away from his early lyricism and pointed the way toward what would become known first +as Imagism, then as Vorticism. This was the hard new poetic style that Pound promised would give you the exact curve that you wanted. Ironically for a poet whose stock-in-trade was fragmentation and regeneration, Hulme was literally blown to bits by a direct hit from a German shell. One suspects that he wouldn’t have wanted it any other way. 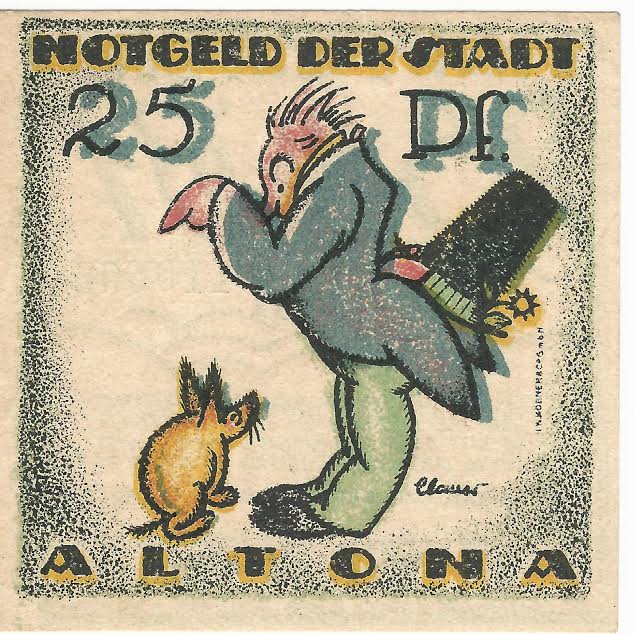 “Come to the German Society’s Ratskeller on October 19th at 2:30 pm for a presentation about Notgeld! This is an opportunity to reflect on this unique era in German history and marvel at our presenters’ wonderful collection, which will be on display during the presentation and the coffee hour that will follow. German Notgeld (“emergency money”) was primarily issued during World War I and during the hyperinflation years that followed. Towns, local savings banks, municipalities, as well as private or state-owned firms printed their own, often very colorful Notgeld, like the example shown on the left.

If your parents or relatives left you some of these treasures, including the very large denomination currency printed during the Weimar Republic, we invite you to bring them as your own show-and-tell examples.

Our two collector/presenters, Dr. Carl Renner and Pamela Stitely, are involved with the Wilmington Coin Club and the Currency Club of Chester County.

Please RSVP to the office via phone or email. We hope to see you there!”

On March 4, 1916 the world of German art was dealt a devastating blow when Franz Marc, a leader of Der Blaue Reiter school of Expressionism was struck in the head by a shell fragment at Verdun and died instantly.
Ironically the German High Command had belatedly realized the importance of the nation’s artists to its war effort—Marc had already devised ingenious camouflage schemes for use in the field—and had decided to withdraw them from service on the front lines, but the orders for Marc to withdraw came too late.

Franz Marc was best known for his vividly-colored paintings of animals in which elements of representational and abstract art were skillfully blended. One of the last of these, “The Fate of the Animals,” completed in 1913 was accompanied by these lines, “And all being is flaming agony.” Such sentiments were unlikely to endear the artist to a certain corporal and the collection of thugs and second-raters who comprised his Third Reich and so Marc and his work was consigned to oblivion as “degenerate art.” It’s unfortunate that the shrapnel sometimes tears into the wrong head.