Beatrice Mae Correia’s WWI scrapbook, now a feature of Villanova University’s Special Collections, displays graphic and often disturbing images from the Great War. Many war-themed scrapbooks tend to portray personal or familial involvement, such as the scrapbook of Einer Smestad, WWI US Infantryman, or Captain James Archbald’s scrapbook of the Mexican Revolution Border War. Correia’s collection, on the other hand, exhibits the gruesome death and destruction of WWI. A number of the photographs appear to be acquired from retail sources, as duplicates are found in other WWI special collections. Photography of war corpses developed into a popular practice, particularly during the American Civil War, and Correia represents the consumer market for this distinctive product.

Photos of war corpses wash away the clean, sanitary picture of war and bring to light the ghastly consequences. Yet today’s surplus publication of gore and death, as seen in movies, YouTube, and other media sources, seems to dampen the sobering effect. Reality and imagination tend to merge, predominantly with the former morphing into the latter. The people viewed in this scrapbook existed. They were someone’s child, sibling, parent, friend, and confidant. They had dreams and aspirations. Where would you draw the line of respect and remembrance in regards to these immortalizations of others’ suffering and death? 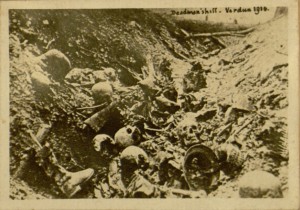 The first page of Correia’s scrapbook contains an image of Deadman’s Hill commonly found on the face of postcards. This photo depicts dead Germans at Morte-Homme – Deadman’s Hill – in France after the Battle of Verdun. In 1916 the Germans sacrificed a significant amount of men and arms in an attack that was intended to acquire a swift and decisive victory; this anticipated success was to come at a time when Germany needed to reaffirm her superiority in the face of internal dissention and external skepticism. The resulting German ‘defeat’ led to Verdun’s nickname as “The Slaughter-House of Germany.” (The Battle of Verdun (1914-1918), p. 29, 1919, Michelin & Cie: Clermont-Ferrand, France) The photo acutely conveys the horror of the aftermath, notably with a bare leg bone protruding from a disfigured boot in a fashion worthy of Hollywood carnage scenes. 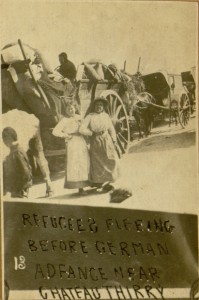 It is estimated that WWI generated a minimum of 10 million refugees, almost a fifth of which were internally displaced French persons. (Refugees, 2014, Gatrell, Peter, International Encyclopedia of the First World War) Imagine your own life as a WWI refugee. Fleeing meant leaving your home with the understanding that it will likely be uninhabitable when – if – you return. You could only take what you could carry. You would lose contact with almost everyone you know. Your livelihood would depend on the goodwill of strangers, who may eventually tire of the influx of refugees. You may try to stay near your home, hoping to return soon, only to be pushed farther and farther away along with additional refugees. 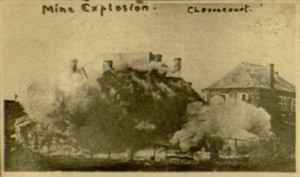 This image, on record in two other locations (WorldWar, Durham Museum), likely shows the German mine explosion in French-occupied Chauvoncourt, France on November 18, 1914. (The New York Times Current History: The European War, Volume 2, p. 1011, 1917, New York Times Company) Where would you prefer to be in the Great War: on the surface with poisonous gas, bullets, and explosives, or below the ground with poisonous gas, potential tunnel collapse, and explosives? 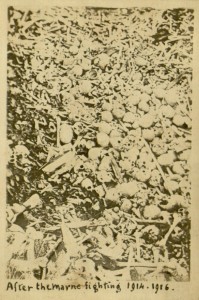 Countless skulls, long bones, and ribs, all piled together in an indistinguishable mix. Is it easier to objectify these corpses, as they no longer resemble a single, complete human form, with no human identifiers such as clothing? Does it matter if these are allies or enemy? This grisly pile of human bones represents only a sampling of the death accumulated, on both sides, during the Great War.

Count Alfred von Schlieffen had a plan for a quick victory if and when Germany had to simultaneously engage the forces of France and Russia in combat. Fighting a war on two fronts would give most sensible planners pause, but as von Schlieffen reckoned the matter, it was all a matter of timing. The vaunted “Russian steamroller” would need time to build its momentum. The smart thing was to quickly engage and finish off the French forces then the army could pivot and turn its attentions to the Russians.

Although von Schlieffen thought he had taken every possibility into account, he ignored the fact that his plan disregarded an earlier strategic plan drawn up by Helmuth von Moltke the Elder in the aftermath of Prussia’s victory in the Franco-Prussian War of 1870. The elder von Moltke envisioned a main thrust against Russia and a lesser effort against the French who had already been tested and bested in battle. But von Schieffen had no way of knowing that his successor as Chief of the German General Staff would be none other than Helmuth von Moltke the Younger. The younger von Moltke didn’t think much of the new plan. Why make that long swing through Luxembourg, Belgium and Holland and then down the coast to attack France, “letting the last man on the right brush the Channel with his sleeve” as von Schlieffen put it? It was faster and more efficient simply to cut through Belgium to reach northern France. The Belgians wouldn’t put up much of a fight. After all, their neutrality was only a scrap of paper.

One fact overlooked by both von Schlieffen and von Moltke was the London Treaty of 1839. Yes, as it turned out Britain had an agreement to come to Belgium’s aid if Belgium was attacked. This small but effective cog in ”The Machine” doomed any German hopes for a quick victory over France that might induce Britain to ignore their Entente cordiale. Before a single German boot touched French soil, Great Britain was already pulled into the war.

Over the years much ink has been spilled over the question: might the von Schieffen Plan, if left unaltered, have delivered to Germany the one-two knockout punch that it promised? It seems odd that a plan so long in the developing would be so cavalierly altered at the end. Of course 1905 was not 1914 and von Moltke acted in the manner he thought would most benefit Germany’s interests. But as it turned out, the Belgians proved an unexpectedly tough nut to crack. The French managed to rally their forces at the Marne. The British landed an Expeditionary Force in France, and no one would be going home before the leaves fell.

It all began with German Chancellor Otto von Bismarck. He had two concerns—one, that France might try to reclaim land lost to Germany in the Franco-Prussian War, two that Russia might continue making advances into the Balkans. So, in 1882 he proposed what he considered would be a defensive alliance with the Austro-Hungarian Empire and the Kingdom of Italy, the thought being that the Hapsburgs would contain Russian ambitions, while France would he faced with a two-front war—Germany to the northeast and Italy to the southeast if she attempted an offensive.

Neither the French nor the Russians were happy with Bismarck’s solution. France was left isolated, and Russia felt disrespected, so the answer for their diplomats was to form new alliances. In 1904 France signed the Entente Cordiale with Great Britain. The French had a much larger land army than Britain, but Britain’s fleet was without peer and once hostilities actually broke out, soon proved that control over shipping and the sea-lanes was no small weapon in one’s arsenal.  So at this point France could say that if they attacked Germany, Italy would attack them, yes, but Britain and her formidable fleet would move against them both.

Thus far, this system of alliances was, in its own strange way about preventing wars. In essence it was saying, “Look, I’m a little guy, but if you attack me, my bigger stronger friend will attack you.” If Russia thought a victory over Austria-Hungary would be easy, they had to re-think things if suddenly Germany, with the largest and strongest of all European land armies, would move against them.  Similarly, if Germany had an urge to attack France, they would be confronted with the mighty Royal Navy.

England further involved herself by signing the Anglo-Russian Convention in 1907. Now, if Russia decided to take on Austria-Hungary, it was true that they would have to face the German army, but Germany and her Hapsburg allies would face retaliation at the hands of the Royal Navy. In theory this would all work as long as the players were rational and took their national interests into account.

But true believers are rarely rational and Young Serbia felt that the Hapsburgs had no place in the Balkans. When Gavrilo Princip fired his pistol, he wasn’t thinking much about the ultimate interests of England, Germany, France or even Russia, “the Mother of the Slavs.”

Now there was an all-but insurmountable problem. Each of the potential combatants, with the exception of Britain and Germany had dealt with politically-motivated assassinations of their heads-of-state, and none of them approved of the custom. Austria-Hungary was the aggrieved party—the heir to their throne and his pregnant wife had been murdered. What were they to do? A volley of pistol-shots had set in motion a machine that there was no stopping.