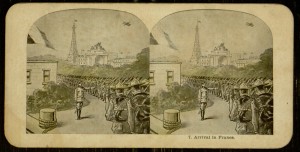 Created as part of a U.S. propaganda effort to show  in graphic form the glorious and adventure filled -but ultimately safe – story of a young Everyman in American service from patriotic recruiting office to the battlefields of France through captivity and escape, and then safely home to  “the Old Home Town”,  this newly digitized set of 25 print-drawing stereogram cards is now available for research. 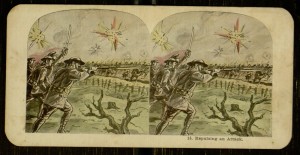 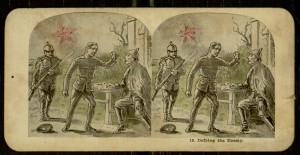 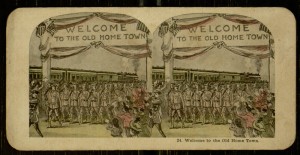 Most stereogram cards of this period used photography (as can be seen in the following “Rat on Toast – for Dinner” stereogram) to capture two slightly different images which when viewed through a stereoscope produce a vivid 3-d effect.   Of course, printed drawings carefully colorized could also be used to created a vibrant effect.

Using the New York Public Library Lab’s Stereogranimator one can create and then use an animated stereogram.  Here is #20 from this set: