The Library Company of Philadelphia is one of many institutions in the Delaware Valley region preparing to commemorate the 100th anniversary of World War I.   After spending this fall working as a digital collections intern at the Historical Society of Pennsylvania, in January I moved next door to intern with the Library Company of Philadelphia. As an intern, I have the opportunity to explore the Library Company’s World War I-related collections, and call attention to items that grab my interest. Hopefully this blog post will be one of many, as I work my way through LCP’s fascinating collections of World War I photographs and posters.

On April 2, 1917, nearly three years after World War I had broken out in Europe, President Woodrow Wilson appealed to the United States Congress to declare war on Germany. President Wilson cited two reasons for seeking a congressional declaration of war: Germany’s continued use of unrestricted submarine warfare in the Atlantic and Mediterranean, and Germany’s attempt to recruit Mexico as an ally. Two days later the U.S. Senate voted to declare war, and the House gave its support on April 8. 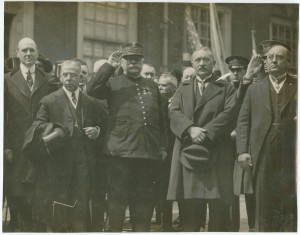 In response to the American declaration of war, both the British and French governments sent representatives to the United States. René Viviani, the Minister of Justice and Public Information led the French Commission, which also included Marshal Joseph Joffre, “the Victor of the Marne,” Admiral Cocheprat, and Joseph Smith from the Ministry of Finance, among others. The French Commission arrived in the United States on April 24, 1917, and made their way to Washington, D.C. Over the next two weeks, the French representatives also visited Chicago, Kansas City, St. Louis, Springfield, Illinois, before arriving in Philadelphia on May 9.

On May 6, the Pittsburgh Press reported that Dario Resta, “speed king of America,” had volunteered his driving skills to act as Marshal Joffre’s chauffeur while the commission visited Philadelphia. Mayor Thomas B. Smith guided Viviani, Joffre, and guests through “lavish entertainment,” which included visits to Benjamin Franklin’s grave and the University of Pennsylvania, where Viviani and Joffre received honorary doctor of law degrees. When the commission reached the Liberty Bell, Viviani kissed the both bell and his host, Mayor Smith. 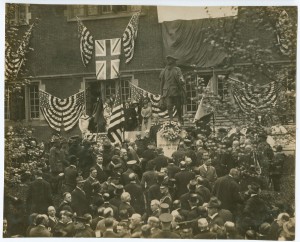 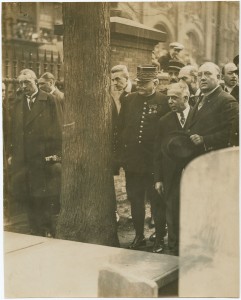 Over 100,000 spectators lined Philadelphia’s streets as the French Commission made its way through the city. Philadelphians formally paid their respects to the visiting French dignitaries by presenting Marshal Joffre with a sword during his five and a half hour visit.

Although this selection of photographs captures the festive nature of the French Commission’s visit to Philadelphia, the French sought more than just displays of American enthusiasm and fraternity. In a luncheon speech, Minister Viviani emphasized:

The French had been sending their soldiers into the trenches on the Western Front for three years. For Viviani, this was a war not of territory and conquest but of liberty. To conclude his speech in Philadelphia, Viviani described the flags of the allied nations as one unified banner:

“The flag of humanity, the flag which waves so high that it can be seen by all men in the world: a flag that shines so radiant that all men on earth long to see the promises of liberty of equality and justice which its folds contain and announce, shower down on all the earth.”