Voices from the Pennsylvania Iron Division

One of the most exciting aspects of working in a museum archives (and yes, it can be exciting), is when you find a document that transports you to that moment in time. A document that gives you small, yet brilliant glimpse into an individual’s experiences.

For me this happened when I was about a month into cataloging a collection of WWI letters for The Pennsylvania Military Museum. The letters were written by Harry Campbell, a supply sergeant in Pennsylvania’s 28th Division, also known as ‘The Keystone Division’. This collection of letters span from November 1917 to January 1919 and detail his training, his role as a supply sergeant, and eventually his experiences in battle. However, there was one letter in this collection which was not written by Harry. It was a single page, typed letter, addressed to “Dear Friends,” and signed by an ‘R.S.R’, initials that clearly did not belong to Harry. As interesting as it was to find a letter in this collection not written by Harry, it became even more interesting once I read the contents of the letter.

The R.S.R letter was written on July 21, 1918, which was almost a week after the start of The Second Battle of the Marne (July 15-August 6, 1918). It was during this intense, and almost month-long conflict, that the 28th Division would receive its ‘baptism of fire’. American troops, including the Keystone Division, would play a key role in staving off the last major German offensive of World War I.

In the letter, R.S.R. goes into great detail, and refers to the first few days of battle as “…four days of hell.”, with, “High explosives and shrapnel were bursting all around us every second and we had to lay there with gas masks on all night….” We learn that during the chaos of battle R.S.R. was taken prisoner by a German division. “I was a prisoner but managed to get away and was between their first and second line for two days. I had to leave two wounded men, one shot in the ankle and one in the thigh. I swam, waded and crawled down a creek for over a mile and was in the water about 18 hours….” On the 17th of July, he finally came across a French outfit who gave him some food. When R.S.R. finally reunites with what remained of the Keystone Division, he mentions that Harry and the rest of the kitchen staff had also suffered losses. R.S.R describes Harry as, “…all broken up….” He goes on to describe Harry’s experience: “German aeroplanes [sic] swooped down on them and turned machine guns on them and dropped hand bombs. One team was killed, one kitchen blown up, one driver gassed and their lieutenant had an arm badly shattered with shrapnel.” Even through all that he and Harry had experienced, R.S.R. closes the letter with, “There had to be some outfit there and it is just as well that it was us. With all the wounded and dying I never heard a word of complaint, and all that could, pulled the trigger ‘til the last.” 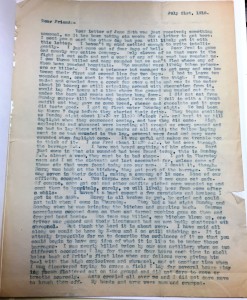 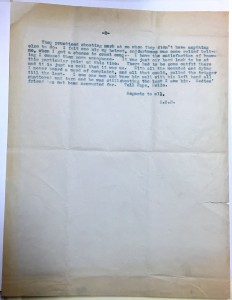 To find a letter as articulate and expressive as this one was extremely exciting. Naturally, I then started trying to learn more about R.S.R. Luckily; Virginia Waters, an intern at the PA Military Museum was already on the trail! So, with a great deal of help from Virginia, we soon discovered that R.S.R was Reuben S. Rakestraw, a mechanic who served with Harry Campbell in the 28th Division. Virginia had the chance to talk with Harry’s daughter, and discovered that Reuben and Harry became close friends during the war and remained so for many years after. Harry often referred to Reuben as ‘Shorty’, a name that was frequently mentioned in Harry’s letters home. In fact, when the pair returned home, Reuben introduced Harry to his future wife. 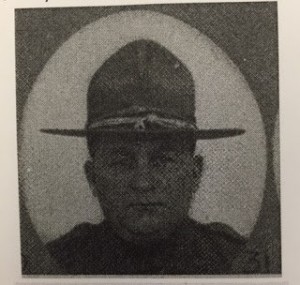 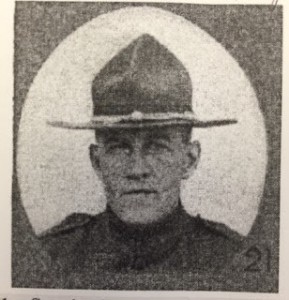 While vital records tell us some things about Shorty’s life, we learn more about his experiences in war through this one letter, than with all the vital records combined. Shorty’s letter is both tragic and telling of what many American doughboys experienced in this Great War. We learn the crippling affect that these newfangled weapons of mass destruction had on Shorty, as well as the men around him. This is the kind of information that vital statistics cannot convey. We also know that stories like Reuben’s were not uncommon, and in fact many fared considerably worse.

Because of their brave fighting at the front, General John Pershing referred to the 28th Division “The Iron Division”, a name that they still go by. During the Second Battle of the Marne more than half of Harry and Reuben’s company, Company C, were killed, wounded or taken prisoner. But because of the Iron Division, and the rest of the American Expeditionary Force’s perseverance, the Germans were forced to retreat, and suffered more losses than the British, French and Americans combined.

For me, the ‘R.S.R. letter’, and the other letters in the Campbell Collection, put the events of World War I into a personal context, thus making the past more tangible. Seeing firsthand how these men dealt with the difficulties they faced, helps me understand more fully the mentality of American doughboys. By sharing Reuben’s letter, it is my hope that others gain a similar understanding of American soldiers during The Great War. 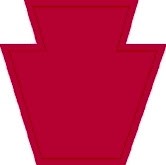