“With the Ulster Division in France” ongoing audio podcast 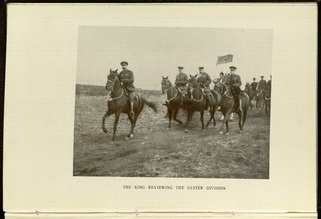 “The King reviewing the Ulster Division”

“With The Ulster Division in France : a Story of the 11th Battalion Royal Irish Rifles (South Antrim Volunteers), From Bordon to Thiepval.”

A reading of the memoir by Captain Arthur P. I. Samuels of the 11th Battalion Royal Irish Rifles, covering the period ranging from the embarkment of the battalion from England for the north of France in October of 1915, to July 1, 1916, the date of the First Day on the Somme.  Audio editing and voice talent by Stephen Spatz, Villanova University.

3 podcasts available so far! Listen in at:

Podcast: With The Ulster Division in France
[https://digital.library.villanova.edu/Item/vudl:468950] 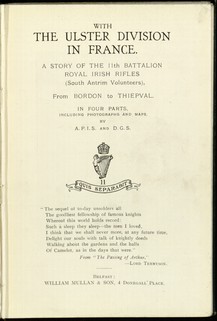 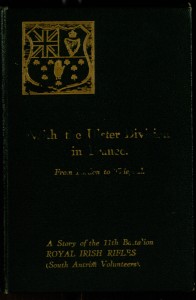 While primarily considered a British offensive, the Battle of the Somme,  which started on July 1, 1916,  one hundred years ago this week, involved troops of many nationalities.  This bloodiest battle of the Great War which would kill over a million soldiers and which serves to this day as the icon for the war’s futility, was also the source of patriotic pride and sacrifice for  for Irish soldiers under arms for king and county.

The Ulster Division’s sacrifice on July 1, 1916 is clearly depicted in the rare unit history: With the Ulster division in France : a story of the 11th Battalion Royal Irish Rifles (South Antrim Volunteers).   Available in digital reproduction from Villanova University’s Digital Library this work was published in Belfast from the manuscript of Arthur Purefoy Irwin Samuels killed in action in 1916, and created for veterans by veterans.  With photographs, maps, and a roster of the Battalion, this unit history of the 11th Battalion R.I.R. (S.A.V.)  reaches greatest poignancy when one notes the penciled in status on the unit roster showing “Killed” next to the names of the dead by the book’s former owner – one of the survivors.  These faces still gaze out of the page with hope and resignation. 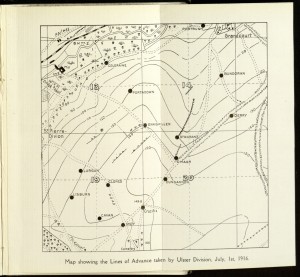 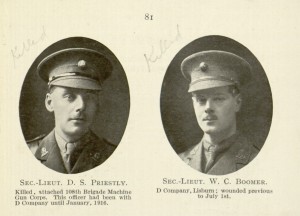 The poem, The Red Hand of Ulster: Somme – July 1st, 1916  starts on page 57.  This literary work gives immediate voice to the emotions of sacrifice shared by the closest of companions.  From stanza 4:

Now comes the news of battle-

Of our great Western rampant-

A wall of thews, and soul-

And Ulster’s sons are writing

Their names upon a scroll. 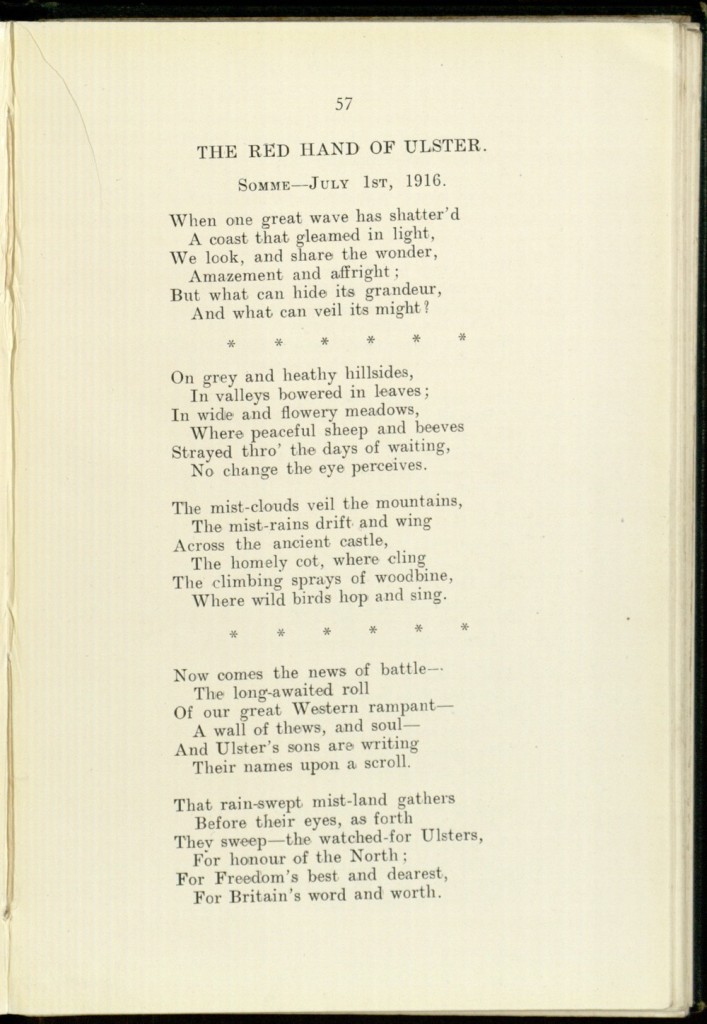