While most of the country was quite pleased that President Woodrow Wilson “kept us out of war,” there were a few Americans couldn’t wait to get into it. One of these was Alan Seeger who was so eager to join the fight that he enlisted in the French Foreign Legion. No ambulance driver he; Seeger wanted to be in the thick of things. In his diary Seeger wrote: Had I the choice I would be nowhere else in the world than where I am. Even had I the chance to be liberated, I would not take it. Do not be sorrowful then. It is the shirkers and slackers alone in this war who are to be lamented. The tears for those who take part in it and who do not return should be sweetened by the sense that their death was the death which beyond all others they would have chosen for themselves, that went to it smiling and without regret, feeling that whatever value their continued presence in the world might be to humanity, it could not be greater than the example and inspiration that they were to it in so departing.”

So Seeger’s famous poem “I Have a Rendezvous with Death” was more than just empty romantic posturing, and Seeger was more than just a tinsel hero. In that same diary he chafes at being compared by critics to the recently deceased British hero-poet Rupert Brooke grousing “I never could get my book of poems published before the war.” But Seeger’s battlefield death raised him to such a position that, a few decades ago, you couldn’t browse the poetry section of a used book store without finding that same book of poems gathering dust on the shelf. That tells you that there was a time when Alan Seeger had been an immensely popular writer. Today it is no longer the case that volumes of Seeger are to had for the asking. In fact original editions seem to have become quite scarce. That tells you that people are again reading Alan Seeger and those once despised volumes have found new homes for themselves. With the publication of a recent non-fiction book dealing with Seeger and other young Americans who served in the French Foreign Legion the time seems ripe for this account, once rendered, to be opened and examined once more. 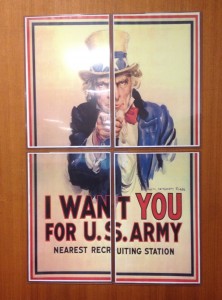 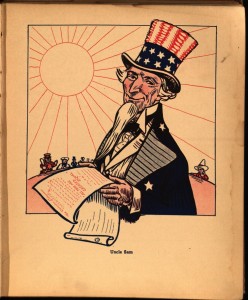 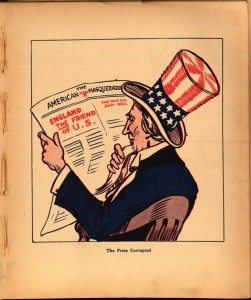 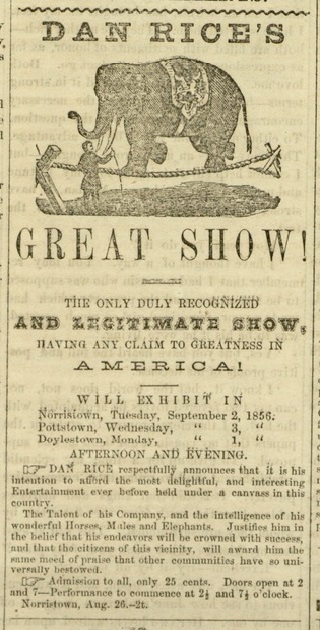 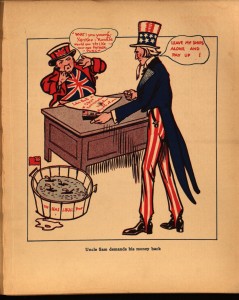 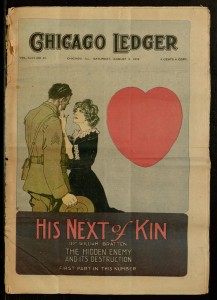 The Chicago Ledger was a story paper published in Chicago, Illinois from 1872 until 1924. Available nationally on newsstands at time of publication, this color serial printed on lower quality paper has become one of the rarer items to find intact. Even incomplete and fragmentary issues are a rarity worth preserving, and containing fiction, advertisements, cartoons, cut-outs, and editorials. Digitization of these oft-times crumbling issues provides a way for researchers – both local and remote – to read and view this content without damage to the fragile original. 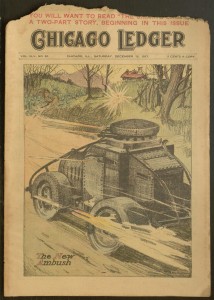 Ongoing digitization efforts are making issues available, but especially noteworthy are the available issues published during World War I  years (1914 / 1916 / 1917 / 1918  /1919) Of course more issues are being regularly added.

After United States entry into the war, a regular feature was the inclusion of cutouts. “Look Children! Here’s fun for you!” (see below), is one of a set of color images designed to be cutout and assembled as paper toys, some of these include American tanks and fighting airplanes, and even a Red Cross ambulance! Today, digitized as high-resolution color scans, these pages can be downloaded, printed – and assembled by young and old alike  – (linked article lists many  available WWI-era cutouts). 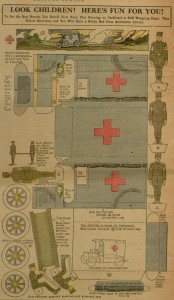 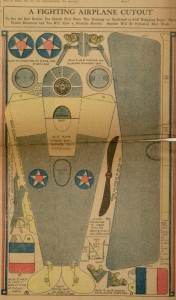 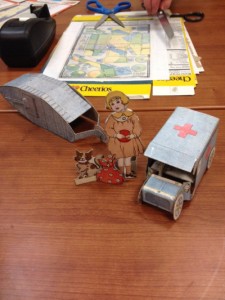