A Modern Battle Portrayed in Miniature 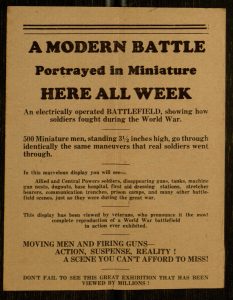 One family side show, The Millers Mechanical Shows, founded by John E. Miller and son Clifford M. Miller, traveled the United States showing their miniature reenactments, including their first act “Industrial City“, and later, in 1917 as American troops entered combat in Europe, “Battlefield” – a reenactment of World War I. They also documented the other acts that they traveled and performed with and the places that they visited ranging from Jacksonville, Key West, Daytona, and St Augustine in 1917, to Virginia, North Carolina, Wyoming, Colorado, and even Regina, Saskatchewa, Canada. Newly digitized by the Digital Library at Villanova University this rich set of materials documents American circus life, travel and tourism, as well as the Great War! 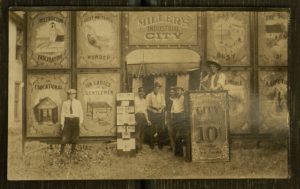 A 1923, broadside describes the “Battlefield”, “500 miniature men, standing three and one-half inches high .. . The aeroplane is driven by its own motor, gaining its power from two collecting rings at top of roof. … The show consists of two Armies in combat on the slopes of two mountains which form a road way‘ through a French village; showing the frowning Forts of the Central Powers; the Allied armies are seen to the left. Both armies have their skirmish lines, first. Second and third line reserve trenches. The German soldiers have a gun that actually loads a shell every two minutes, a prison camp and inmates, gun repair shop, deserted coal mine … sentry on duty, Kaiser Bill and his staff, observation post, wireless aerial, remount station, field batteries, Machine gun nests and pillboxes, hospital. … It works in life movements, taking about forty-five minutes to view the three sides.” 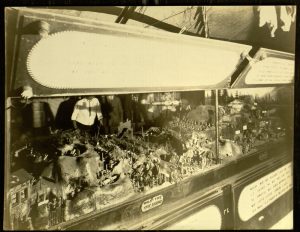 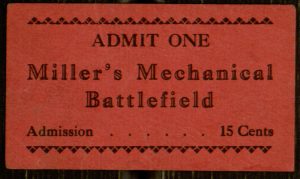 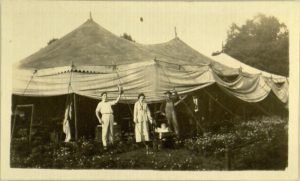 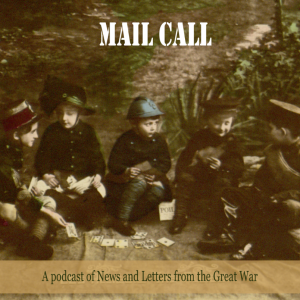 Episode 8 of the Mail Call podcast concludes our two-part look at the 1917 Russian Revolutions (featuring content from July to December 1917). Mail Call is also available through iTunes/Apple Podcasts.

Over the flat slopes of St. Eloi
A wide wall of sand bags.
Night,
In the silence of desultory men
Pottering over small fires, cleaning their mess-tins:
To and fro, from the lines,
Men walk as on Piccadilly,
Making paths in the dark,
Through scattered dead horses,
Over a dead Belgian’s belly.

The Germans have rockets. The English have no rockets.
Behind the line, cannon, hidden, lying back miles.
Beyond the line, chaos:

My mind is a corridor. The minds about me are corridors.
Nothing suggests itself. There is nothing to do but keep on.

Trenches: St. Eloi
(Abbreviated from the Conversation of Mr THE)

Until now the Allies were slightly ahead in the grisly business of killing off the artistic elite of the pre-war world. Germany had suffered the loss of its core creators of the Expressionist movement in art and literature—August Macke and Georg Trakl in 1914, August Stramm in 1915 and Franz Marc in 1916—whereas Britain had lost only Henri Gaudier-Brzeska, a promising artist and sculptor in 1915. But this would change on September 28, 1917 with the death of Lieutenant Thomas Edward (“T. E.”) Hulme.

Had he survived the war Hulme would undoubtedly have exerted great influence over British art and literature through his already-established reputation as a philosopher of Art, while his extreme conservatism would have served to moderate the influence of the politically-engaged (and left-leaning) poets of the 1930s.

What is perhaps forgotten is the handful of revolutionary poems Hulme left behind. Revolutionary poems from an arch-conservative? This sounds a bit strange, but it arose out of Hulme’s conviction that poetry needed to find a new path somewhere between the emotional, quasi-religious excesses of Romanticism and the dry-as-dust offerings of Classicism. What Hulme found was the power of the image, presented without rhetoric or sentimentality to evoke a response in the listener or reader. He influenced Pound away from his early lyricism and pointed the way toward what would become known first +as Imagism, then as Vorticism. This was the hard new poetic style that Pound promised would give you the exact curve that you wanted. Ironically for a poet whose stock-in-trade was fragmentation and regeneration, Hulme was literally blown to bits by a direct hit from a German shell. One suspects that he wouldn’t have wanted it any other way.