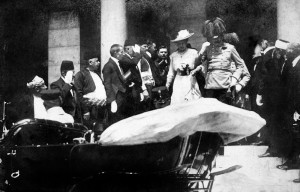 World War One, it is convenient to say, started with the two pistol shots that killed Archduke Franz Ferdinand and his wife Sophie in Sarajevo on June 28, 1914.  Somehow, this act of political terrorism lit a fire that consumed Europe in the greatest war the world had yet seen.

The “real” causes of the war have been debated ever since.  Militarism and the arms race?  Secret and not-so-secret defense treaties?  The competition for colonial power?  The desire for territorial expansion?  Nationalistic fever and national honor?  Governmental ineptitude?

All these factors contributed to the outbreak of the war; none alone caused the war.

Despite political tensions and social and economic inequities, Europe appeared to many remarkably stable and prosperous.  If there was one overriding emotion on the continent, it was optimism, a faith that lives were getting better and would continue to do so.

At this distance in time the war seems a pointless waste, destroying old Europe with mechanized, anonymous, mass death and shattering all illusions of war as romantic adventure.  Survivors were left anchorless, and the  seeds were sown for the next, greater conflict.

In Tender is the Night, Dick Diver, the protagonist of F. Scott Fitzgerald’s novel, says, while surveying a World War One battlefield, “All my beautiful lovely safe world blew itself up here with a great gust of high explosive love.”

Arch romantic he may have been, but Fitzgerald was right.